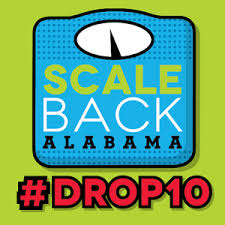 
Jan. 09, 2017. Scale Back Alabama, a statewide weight loss contest, will kick off its 11th year this Wednesday, January 11 as participants are invited to weigh in at designated spots around town.

Each year the program invites participants to join with a partner and work toward losing 10 pounds in 10 weeks. Lee County participants lost more than 4,000 pounds last year, contributing to the state's more than one million pounds lost since the contest began in 2007, according to a release from the Alabama Department of Health.

All individuals who lose 10 pounds will also be entered into a separate drawing where 40 people will win $100. Those entering the team drawing will not be eligible.

Monthly activities to keep participates active will be scheduled throughout the contest and tips can be found at www.scalebackalabama.com . Dale Medical Center will serve as weigh-in sites again this year from Wednesday Jan. 11 through Jan. 18. Participants are invited to register for the contest online at www.scalebackalabama.com and bring their registration form with them to weigh in.

Dale Medical Center will serve as a weigh-in site for Dale County: